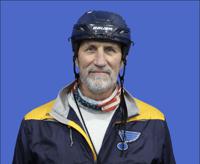 Growing up in South Minneapolis (MN) in the 60’s, all of the kids played pond hockey and park board hockey on outside rinks from an early age. Began playing organized hockey at the park board rinks outside and as I got older moved to inside rinks through Legion and VFW sponsored teams then high school. I was picked up by a junior team the Rockets located in Spokane, Washington who played in Western Canada after graduating from High School and decided to try to make a go of it in hockey. After a “couple of cups” of coffee in the minors 74/75 with the Madison Blues of the old USHL league I left the game to work on a family until moving to St Louis in 1995. Started playing again with John Wensink’s men’s team and lead or assisted coaching for High School, Team Missouri and AAA teams until 20010. Have always enjoyed coaching at all levels. Have been an associate member of the Blues Alumni for  several years which led to participation with the St Louis Blues Warrior Hockey program.  Have always admired the Blues Alumni organization and the good things they do for the community every year. Consider it an honor to be associated and able to help out.

Which position did you play?

What was your most memorable college hockey moment?

Not College, but in 1974 played for the Spokane Expos a team that played exhibition games as a representative of the 1974 World Fair in Spokane Washington. Was the youngest player on the squad and learned a lot from the older current and former pro players.

How did you get involved with the St. Louis Blues Warrior Hockey program?

Through the Alumni association as an associate member skating with the Alumni group. I was introduced to Nathan and offered to assist if Rob and the organization needed help. Rob said yes come on out and here we are.